The Second Boer War (11 October 1899 – 31 May 1902) was fought between the British Empire and two Boer states, the South African Republic (Republic of Transvaal) and the Orange Free State, over the Empire's influence in South Africa.

On 29 May 1900 Pretoria surrendered to the British commander-in-chief, Lord Roberts. 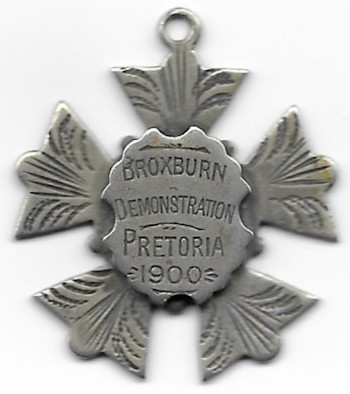 The West Lothian Courier reported on Friday 22 June 1900 that a meeting of the Broxburn Pretoria Demonstration was held in the Wilson Hall at the end of the previous week. It added that a house-to-house collection had raised over £21. This resulted in them being able to order commemorative medals for 1300 children who took part in the procession to celebrate the occupation of Pretoria.