The lands surrounding Middleton, known as "Strathbroke" are mentioned in the time of King William the Lion as belonging to the Earls of Sutherland. Middle-tun meant the middle farm between Easter Strathbroke and Wester Strathbroke.  It passed to the Douglasses at about the beginning of the 15th century after which the ownership changed hands several times until purchased by Sir Lewis Steuart whose grand-daughter Katherine married Henry, Lord Cardross.

The present Middleton Hall has been added to several times since the Reverend George M. Barclay built on an earlier site in 1707.  The house was built largely of stone from the old, ruined Strathbrock Castle, a stronghold of the Douglasses. 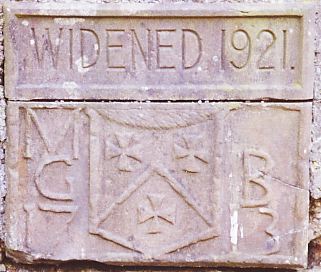 Rev. George Barclay had a date stone installed into the bridge over the Brox-burn, at the junction with Middleton Road, in 1713.  The initials MGB are for Mr George Barclay.  The coat of arms is that of Barclay family of Collairnie, Fife.   The splayed crosses are similar to the cross pattee as used by the Knights Templars.

On 7 February 1745, an advert appeared in the Caledonian Mercury newspaper – To be let, Middleton Hall – ‘about 20 acres of good arable Ground, well enclosed with a good Dyke of stone and lime; also a good Fruit and Kitchen Garden, with a fine Spring-well close by it;’  The house consisted of 8 fire rooms, with cellars, closets and garrets, and also entitled the tenant to ‘a good seat in the Church, with a Fire room off from it’!

By 1781 David, 11th Earl of Buchan resided there upon his succession to the title and carried on experiments in farming.

In 1798 the Estate was bought by William Inglis, Writer to the Signet in Edinburgh for £5,250.  He was a grandson of Colonel Gardiner who was killed at the Battle of Prestonpans in 1745 and whose death is recorded in the novel "Waverley".  Inglis himself had a colourful career.  Though rich and a successful lawyer, he was overcome by the financial crisis of 1828 and declared bankrupt.  All his property, including Middleton, was sequesttrated to satisfy his creditors.

Between 1830, when it was sold to the Threipland family for £7000, and the end of the century, it had four owners.

An account from 1856 describes Middleton as a handsome edifice standing on the top of a high wooded slope rising on the south-side of the Brox burn south of the village of Uphall.  It is two storeys high and has well-built offices attached.  The grounds about the house are all handsomely laid out in ornamental shruberies and flower plots in which is a fine lush bowling green.  The whole ground attached to the house comprises about sixty acres scotch - part arable but the principal portion is ornamental.   In the south end of the grounds is a large, walled-in garden in which is the gardeners house and well stocked greenhouse.  It is the property of the occupier, Captain Hankey.  In 1898 the stables were added to the north side, creating a courtyard.

Reverend James Primrose wrote in 1898 "Looked at from the public road, the Middleton policies offer one of the prettiest glimpses of greenwood in the whole parish, while Middleton Gardens have become a favourite popular resort on summer Sunday afternoons during the season of fruits and flowers."

In 1899 it was acquired by the Broxburn Oil Company, though from 1899 to 1920, it was, for a time, rented to Edinburgh District Lunacy Board as an asylum and, during World War One, used as a rehabilitation centre for soldiers.  This period however came to and end in 1920 when Middleton Hall became the headquarters for what was left of the Scottish shale-oil industry.

In late May 1933, over 1,000 people gathered at Middleton Hall for a conventicle  - an open-air church service, in commemoration of the conventicles in the times of the Covenanters of the second half of the 17th century.   It must have been an impressive site – a huge crowd gathered seated on the grass in the field in front of the house on a beautiful summer’s day,  A massed choir was led by Frank Murrie, and the good old Scottish hymns and paraphrases were sung – The Lord’s my Shepherd, Now Israel may say, and O God of Bethel. – which last was almost an unofficial Scottish national anthem in the past, sung at all important occasions.  Then A.M. Bisset, the Bathgate local historian spoke of the history of some of the Covenanters in this area, notably Lord Cardross, the young heir of the Earl of Buchan, imprisoned in Edinburgh for four years, and more locally, John Potter of Loaninghill.  In 1933, some remnants of his farmhouse were still to be seen ‘on the hill top’.  After taking part in the skirmish of Aird’s Moss against government troops, he was arrested at Loaninghill, tried in Edinburgh, and hanged.

In 1939 an entirely new third storey was added to the building and gave us the Middleton Hall which we see today.

In 1987 it once again changed ownership, to become a nursing home for the elderly.  To this day, it is still a nursing home, though has been owned and operated by several different companies since.