On the 2nd June 1953, the old people of Uphall gathered at the Mission Hall (the site of the New Life Christian Fellowship church building) to celebrate the Coronation of the Queen.  The Mission Hall was a sort of overflow church to Uphall North Church, that was opened in 1883 by the West Lothian MP Peter McLagan – in fact, he had provided the money for it.  It was used for evening services, and latterly it functioned as the Church Hall for the North Church - the Sunday school, choir practices, meetings, jumble sales and so on.  Anyway, fast forward to 1953 – if we’d been standing at this spot on Coronation Day on 2 June, we’d have seen crowds of people arriving.  Screens had been erected, and the TV broadcast was shown in both the large hall and the Lesser Hall to a large group of local people. In the afternoon there was open air dancing in the school playground, watched by a very large crowd, and Broxburn British Legion Pipe Band paraded through the streets. As dusk fell, people came out to see the dozens of bonfires, many with fireworks,  all round the district.  A bus took Uphall  pensioners to see the 25 feet high bonfire on Binny Craig,  from where they could see others blazing in surrounding villages, in the Pentland Hills; and on Stewartfield Bing where ER was picked out in giant letters using naphtha).   In Broxburn, they favoured lots of small teas in separate streets, with the children being presented with mugs, and the pensioners with money – ten shillings each if you lived in Block 2, Church Street, but only two shillings each if you lived in lowly Mid Street!  It was estimated that some 200 television sets were in use in the parish on the day, most of them hired or acquired specially for the occasion.  It was the first event in British history that was widely seen by masses of the population, live on TV.  The only blight on the day was the weather – cloudy and not just cool, but cold. 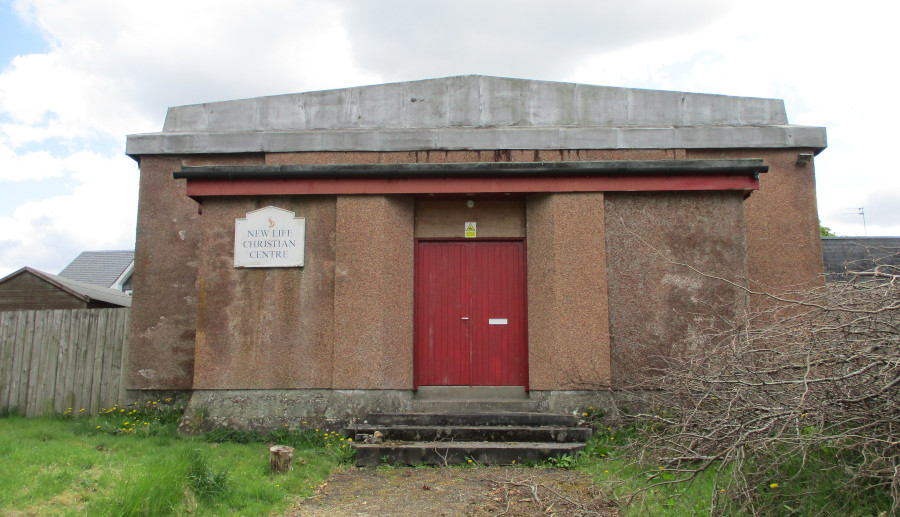 Also on this spot,  if you’d been looking out of your window at the church hall in the middle of the night of 9 February 1975, you might have noticed flames beginning to shoot out of its windows.  Neighbours called the fire brigade, and engines from Broxburn, Bathgate and Livingston fought the fire.  By 4.30am they had it more or less under control, but when daylight came, local people saw that all that was left was a ‘burnt-out shell, still smouldering’.  The building was owned by the Broxburn Assembly of Christian Brethren, who had bought the building from the North Church and were half-way through adapting and redecorating it.  ‘Everyone of us is broken-hearted’ said one of the members.  By contrast, the members of Uphall North Church were mightily relieved.  They had sold the building just a few months previously,  and so it was the Gospel Hall’s loss, and not theirs.  Sadly, it was turned out to be a case of deliberate fire-raising, for within a few days, two boys aged 14 and 15, were charged with housebreaking, theft and wilful fire raising.   In the end, the whole damaged building was demolished and a new gospel hall built on the site.