The "golden age" of the Scottish oil trade was the decade from 1860 to 1870, before the competition from Standard Oil Company of America had been established and the foreign oil began to swamp the native product.  In 1860 there were six oil works and in 1870 these had increased to ninety, but ten years later the number had fallen to twenty-six, and in 1890 to fourteen.  Under the "benificent" influence of Free Trade, or rather Free Imports, the number dwindled to nine in 1900.  In 1913 only seven companies had survived the struggle to exist.  During the sixty years' life of the industry altogether about 120 works were born and died.

As matters stood in 1912, seven shale oil companies survived.  Three of those had only crude-oil works, and the remaining four had refineries in addition.  These works, known respectively as Youngs, Broxburn, Pumpherston, Oakbank, Dalmeny, Philpstoun and Tarbrax, had among them capital of about £2 million and employed about 8100 workers.  Half of those mined the shale and the others worked on the surface.  The total number of people who depended on the industry was well over 20,000.

However, because of the severity of foreign competition, every possible economy and labour-saving device had to be employed to successfully carry on the industry.  This resulted in 1920 with Pumpherston, Broxburn, Oakbank and Philpstoun works merging with Youngs Oil Company to form Scottish Oils, with its headquarters at Middleton Hall. 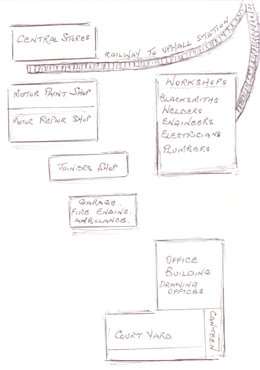 The existing facilities and workshops at Middleton saw a major expansion.  Opposite is a rough drawing of the arrangement of the workshops (provided by Joe Nelson - former Middleton resident and employee of Scottish Oils).

What had formerly been agricultural fields became the new Middleton housing estate.

The housing estate at Middleton was completed in 1923, with a mix of housing types for different classes of worker.  The largest houses, in Westhall Gardens, were provided for management grades (e.g. Constructional Engineer, Transport Manager, Cashier, Stores Superintendent, Architect, and Electrical Engineer).  Middleton Avenue and Middleton Road housed the foremen and senior men (e.g. Foreman Painter amd Senior Men in Workshop).   Burnside Road housed the tradesmen whose hours were 47 per week.

The company had a fire service, ambulance service and a district nurse.  Subsidised electricity was supplied and a half pence per week paid for medical services.

With the substantial increase in population, services such as banking, shops and transport were soon moving into Uphall Main Street.  It wasn't until twenty years later that housing of a comparable standard was built anywhere in the area, and the Middleton houses were still regarded as superior accommodation.

The demise of Scottish Oils Ltd occurred in the early 1960's.  The staff were transferred to Grangemouth Refinery or made redundant.