Dr Wood, who once served as the local Doctor, lived in the first house east of Waz’s shop.  The Saugh Tree, which stood at eastern side of his property, was mid-way between Broxburn and Uphall.  It was the point for the people of Broxburn and Uphall to meet and have a chat. 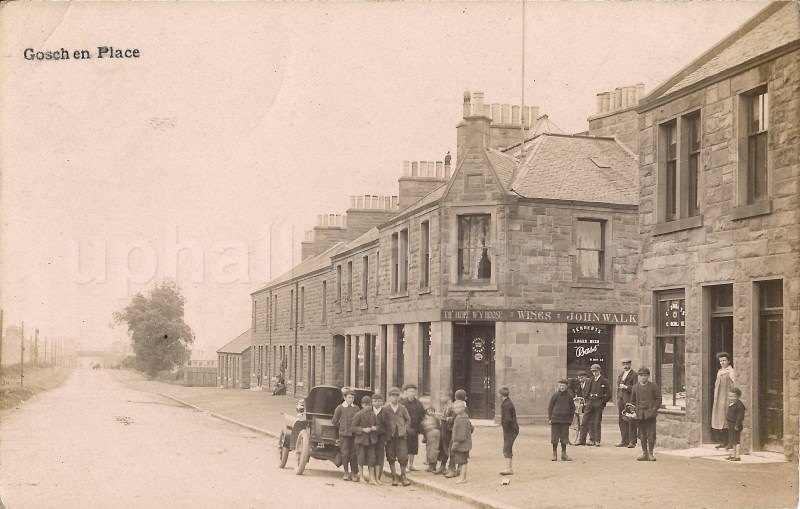 On the 5 September 1947, the West Lothian Courier reported that “Fire has all but destroyed the old ‘Saugh’ Tree – one of the place’s landmarks”.  They added that “on Tuesday evening of this week, some children at play kindled a fire at the base of the old tree and have so damaged it that there is a grave danger that it will have to be cut down”.

The tree was described “as a trysting place and as a turning point for Broxburn and Uphall people out for a constitutional walk”.

The West Lothian Courier reported on the 7 October 1949 that “Perhaps the most familiar landmark in Broxburn is the old Saugh Tree which stands almost directly opposite Cardross Road.  For many years it has been recognised as the mark dividing Broxburn and Uphall”.  Due to the dangerous state of the tree, they note that Buchan Estates have had an order served upon them to fell the old tree.  In further reporting, they add “A year or so ago some miscreants, believed to be youngsters, lit a fire at the foot of the tree”.

By mid-1990, there were plans in place for a new tree, with the West Lothian Courier stating on 3 August 1990 that “Broxburn’s ‘Saugh Tree' is to grow again after more than 40 years with the planting of a willow tree at Goschen Place”.

The replanting took place on the 9 April 1993 with the West Lothian Courier reporting that “Broxburn got a new Saugh tree this week – nearly 50 years after its historic predecessor burned down”.  The Courier note the site of the original tree was “on the site now occupied by the police station”.  Interestingly, they go on to report that the “unlikely guests of honour at the tree-planting ceremony were the culprits who destroyed the original landmark” - brother and sister Jack and Margaret, and their friend Drew.  They note that “the little rascals” had kept their shameful secret, not breathing a word until two years ago.  Thankfully, the authorities looked leniently on their admission!