But then on 5 December 1805:  ‘An alarming fire broke out on Thursday morning, about four o’clock, in the new inn at Uphall.  This fine new house is completely burnt to the ground.  At the time the fire was discovered, the whole people in the house were asleep; they amounted in number, including two travellers, to upwards of 20; their escape was indeed providential, as the house was completely in flames before one of them was alarmed, and had it not been for the stair being of stone, some of them must have perished.  The premises were insured.’  Edinburgh Evening Courant, 9 December 1805

The Oatridge Hotel occupies the site and what we see is the inn that was rebuilt in 1806, but probably looks much the same as the original building.  Several of the windows of the inn are blocked up.  They were probably never glazed, always blocked up, as this was a time when there was a tax on windows – you got the first six windows, I think, free, then paid tax on each window in excess of that. 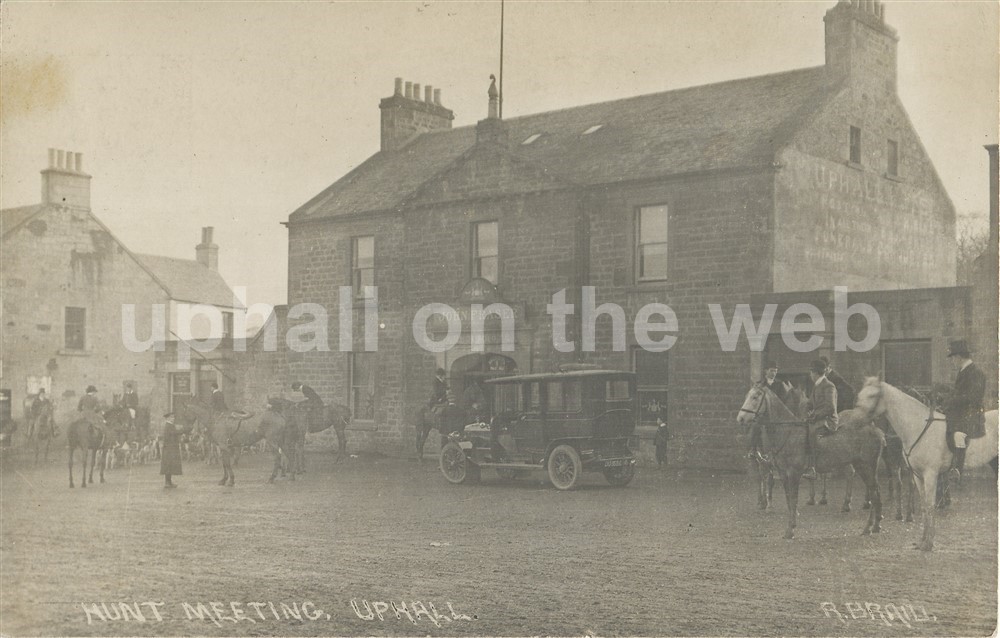 At the back of the inn was stabling for about 20 horses.  You have to remember that this was the era of stagecoaches – they were the inter-city trains of the day.  Drawn by teams of four horses, they were run by commercial companies, who charged the fare according to how many stages of the journey you undertook – hence the word stagecoach.    A team of horse could pull a stagecoach at about ten miles an hour for an hour, before needing to be changed for a fresh team, so coaching inns are found at about ten mile intervals along the route. The next coaching inn to Uphall, heading west was the Craig Inn at Blackridge. So here, the horses would be changed over, the passengers would get a ‘comfort break’ and just time enough to grab a bite to eat or a quick drink – usually no more than 15 or 20 minutes.  Then it was back into the coach – or to the cheaper seats on the top of the coach, and on to Edinburgh one way, or to Bathgate, Blackridge, and eventually Glasgow the other way.

In effect, coaching inns like these were the motorway service stations of the day, catering mainly for the travellers on the commercial stagecoaches, but also for private travellers, and carters and carriers.   They were busy and prosperous for about half a century, and then – along came the railways.  In 1849, the Bathgate-Edinburgh Railway opened, with a station at Uphall Station (originally called Houstoun Station).  The opening of the railway killed off the passenger stagecoach services, as the trains were much faster, cheaper and more comfortable.  However,  the Uphall Inn continued in business as an inn and public house, and as a posting inn, hiring out horses or carriages (or hearses!) to members of the public.