In February 1904, a man called James Nolan, 29 years old, was carried out of the Uphall Model and taken to the fever hospital in Linlithgow.  What was wrong with him?  Smallpox.  It’s astonishing that this dreadful , often fatal disease was still prevalent in Britain early last century.  James Nolan was a labourer who had come to Uphall to work on the new waterworks system for Bangour Village Hospital which opened a couple of years later, in 1906.  When he became unwell, Dr Stewart was called in, examined him, and suspected it was smallpox.  When the rash appeared, his diagnosis was confirmed and he ordered Nolan to be removed from the Model to a fever hospital – possibly Drumshoreland.  ‘The lodging house was at once disinfected, and the bedding, etc. burned, while a large number of inmates have been re-vaccinated – all 130 of them, as the Model ‘has been pretty fully occupied, principally by itinerants employed at the new asylum works at Bangour’.  (Courier 19 February 1904, p5).

The Model had just opened the previous year, in 1903, built on a field of Crossgreen Farm.  It’s interesting that it was built and operated by a private company, whose chairman was one of the local doctors, Dr Alex Stewart.  Perhaps the doctor was motivated by the desire to improve on the filthy conditions of the common lodging house in Uphall.   Model lodging houses were built to be models of what lodging houses should be, and indeed at the opening, the architect stated that the new lodging house was ‘unsurpassed for hygienic considerations’.   This was said after the directors and guests on opening day in Feburary 1903 had toured the building and enjoyed ‘a sumptuous cake and wine banquet’. 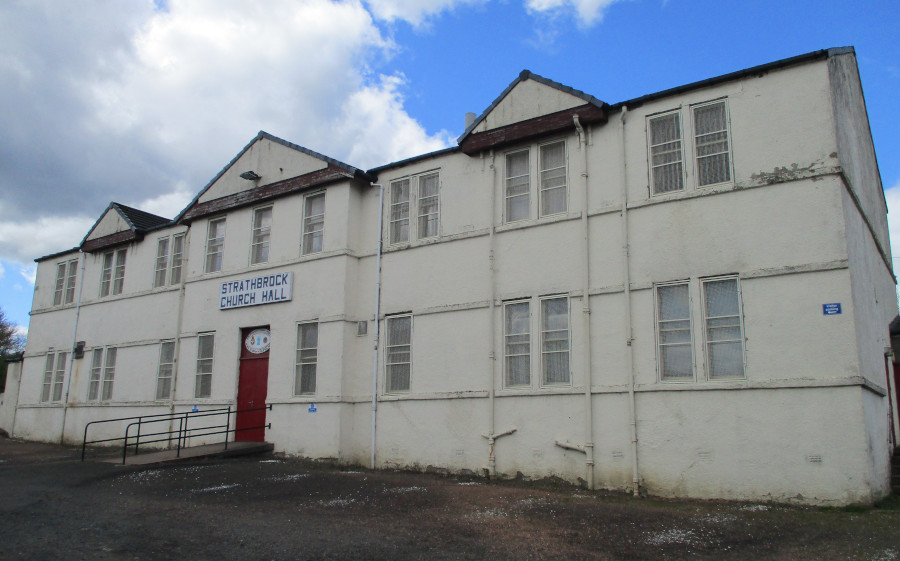 Lodging houses gave shelter to temporary workers and to vagrants in the days when on an average day there were about 240 vagrants workers and tramps on the roads of West Lothian.  It certainly helped to accommodate some of the scores of workers who came to build the huge new asylum at Bangour in the early years of the 20th century. The lodging house could accommodate over 100 men, and about 20 women in a separate dormitory downstairs and it consisted of eating and recreation areas downstairs, and two large dormitories for men upstairs, plus a sick bay.  The dormitories were divided up into cubicles, ‘provided with iron bedstead with wire-spring mattress and hair mattress over.  Cotton sheets, with heavy Ayrshire blankets, finished with bright top cover complete a very enticing outfit.’  There were toilets, showers and baths, with hot and cold running water, and central heating.  Downstairs there were huge hot plates at which each resident cooked his own food, which he could buy from the little shop in the Model.  There was a reading room and smoking room too.

The Model may have started out with all mod cons, but it gradually became shabbier and old-fashioned, not keeping up with changing standards of housing and sanitation.   It closed down in December 1946, and what’s remarkable is that the secretary of the committee which ran the Home was the same man during all these 43 years – James Brown, the postmaster.  But what’s even more touching is that a few of the men who lived in the Home were not temporary workers or vagrants.  This was their permanent home, and one of them, James Conner ‘came here the first day the place opened... and was allowed to stay on for a few weeks after it closed, as he was now old and had nowhere else to go, and the caretaker ‘did not have the heart to put them out in the cold winter snow.’ .  Eventually they found places for him and several others in the Broxburn Model (which in turn closed a few years later), but Models had (according to the Courier) become mainly homes for ‘human flotsam and jetsam’, for derelicts, homeless men, many addicted to drink – probably many with mental health problems.  At least the Model provided a safe home for them, a refuse, a community, a family.  It must have been a very sad day for them on 2 December 1946, when it closed down, for conversion into Hunter and Foulis’ bookbinding factory.